Memories for the Future 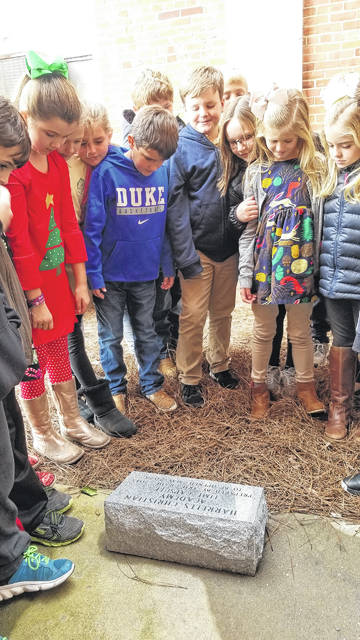 As a third-grader at Harrells Christian Academy, Eve Bradlee Hardison enjoyed capturing memories on camera for students to see in the future.

The pictures with her friend and teacher are now in the ground and will not be viewed again until 2028 when a time capsule is opened for third-grade students.

“I felt special because when I graduate, I’ll come back in this moment,” Hardison said.

Hardison’s happy moments about being a third-grade was just one of many items in the container. It also includes history about Hurricane Florence, which brought devastation to families throughout Sampson County.

“Our basement flooded since we live by the Black River and most of our cats almost died,” said student Kenton Willard.

Willard added a video with her animals and her special one — a horse, she enjoys riding in the field.

Angelia Bass, a STEAM (Science, Technology, Engineering, Art, and Math) lab facilitator for the academy’s lower school, led the time capsule project. The original plan was to show life in 2018 as a third-grader, but that changed because of Hurricane Florence.

“I thought we could make something positive out of it and show people that even though this terrible thing happened, the children were still resilient,” Bass said. “They picked themselves up and came back to school and they tried to help others.”

During the recovery, the students shared stories about churches bringing them food and helped with shelter needs.

“I think that puts a positive spin on a negative thing,” Bass said.

Miller Ludlum’s house flooded — one of many heartbreaking moment for students . He was one of about 20 students who lost their homes when the hurricane hit. Despite distress, he was still glad to be a part of the project.

“It was kind of fun,” Ludlum said. “We collected stuff that we usually do at our house and some people sent in videos of them showing what they want to be when they grow up. There was a lot of information about how it is right now.”

Besides memories of the hurricane, some of the items inside include toys, sport activities, popular dance moves, and technology, which will be outdated a decade from now. Moments and personal stories were placed on flash drives. The engraved marble was donated by Quincy Edgerton of NC Marble & Granite.

“We tried to put some items like an old cell phone so people can see how people played games and what they did,” Bass said. “The main thing is just letting other children know that even though something happened in the past, children are still children.”

She’s looking forward to future HCA students looking back at life in 2018.

“I think this school is special because it’s like a family,” Bass said. “It’s a Christian atmosphere, which is very different. We can openly worship and these children get to be a part of it.”

Brantley Frederick is one those students who are part of the school’s family. He placed a video of himself next to a barn on his father’s farm which produces corn and tobacco.

“It feels good,” Frederick said about being part of the special project.

Along with the capsule, Bass also applauded the work of students and their teacher Lisa Turlington for helping children in another county. The HCA third-graders adopted Michael Sherrill’s third-grade class at Wallace Elementary School. Turlington led the project in honor of Ludlum, which will help more than 20 students in a community which suffered a lot of flooding. Gifts such as school supplies and homemade Christmas cards were delivered Thursday.

“I think it’s great that their class cared about another school and wanted to help them,” Bass said. “It shows what a special class this is of children.”